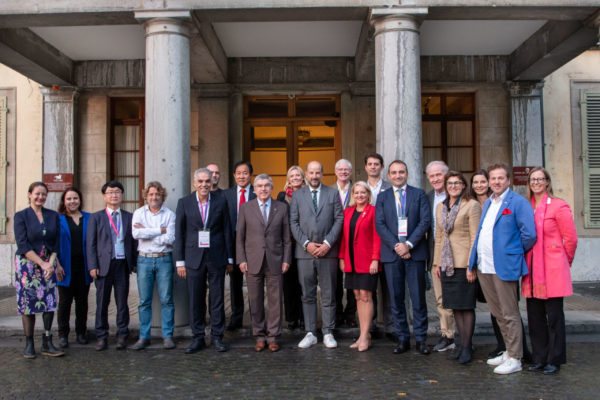 In Lausanne, Switzerland, several Mayors from Olympic Cities came together to discuss how cities can aid in the integration of refugees through sport.

Grégoire Junod, Mayor of Lausanne, welcomed IOC President Bach and Mayors and Deputy Mayors from 13 Olympic Cities to engage in a discussion with UNHCR representatives. The meeting was hosted at the Villa Mon-Repos, the City of Lausanne’s official reception site and former IOC headquarters. The place embodies the strong links between Lausanne and the IOC. Active in promoting the role of sport in integrating refugees, the IOC supports the Lausannebased Olympic Refugee Foundation.

With the increasing number of armed conflicts and climate disorders all around the world, Olympic Cities questioned and discussed their roles both as cities and as Olympic Cities.

Gathered on the occasion of the World Union of Olympic Cities’ Annual Meeting and smartcities & sport summit 2022, Olympic Cities’ Mayors seized this opportunity to address a major issue that faces cities around the world with complex human and logistical challenges.

More than 89.3 million people worldwide have been forced to flee their homes. Among them are almost 27.1 million refugees. A majority of them are under 18. Contrary to a common idea, most refugees do not live in camps, but in cities and urban areas.

With unique status and high visibility, Olympic Cities have the ability to create synergies between the Olympic values they carry, the power of sport as change-making leverage, and the integration of refugees.

This meeting concretely shows the growing role of cities in addressing today’s global and local challenges, both as cities and as members of city networks.