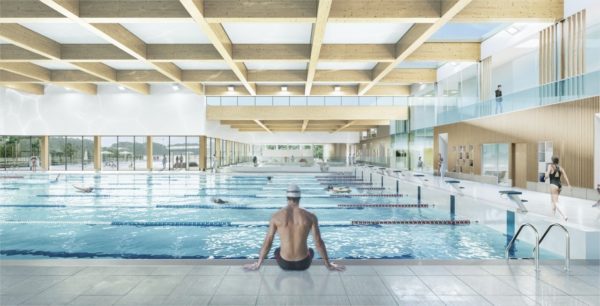 It’s on. The department of Seine-Saint-Denis announced it in a press release: the construction work for the Marville aquatic centre was officially launched on Thursday 21 April. This new facility, financed to the tune of 30.5 million euros by SOLIDEO (Société de livraison des ouvrages olympiques), is located between the municipalities of Saint-Denis and La Courneuve. It is to be used as a training pool for water polo at the Paris 2024 Games. The design, study and building permit phase has now been completed, and the work should be finished in October 2023, for delivery in January 2024. After the Olympic Games, the aquatic centre will be open to the general public in September 2024. It will replace the current swimming pool opened in 1975 in the Marville departmental sports park. The new facility will occupy a surface area of 4,600 m2, including nearly 1,600 m2 of water, with indoor and outdoor pools. It is part of the €40 million “Swimming Pools Plan” voted by Seine-Saint-Denis at the end of 2015, aimed in particular at building five new swimming pools in the department. In Paris’ bid for the 2024 Games, the water polo tournament was planned for Marville. However, the future aquatic centre will only be used for training. The preliminary phase of the Olympic competition will be held at the Olympic aquatic centre (CAO) in Saint-Denis, with the finals planned for the Arena de La Défense, in the commune of Nanterre (Hauts-de-Seine).