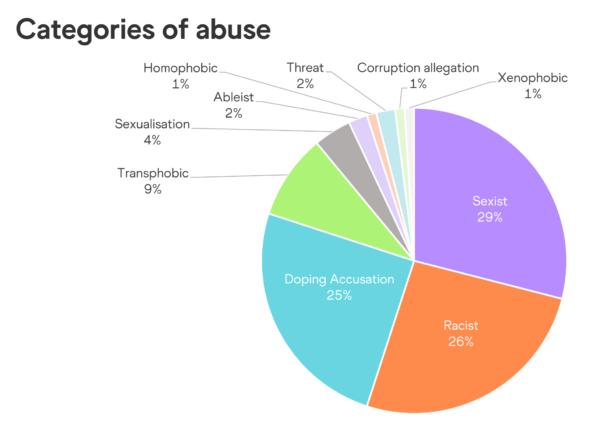 Worrying. World Athletics published on Thursday 25 November the detailed results of a study carried out during the Tokyo 2020 Games on the harassment and abuse suffered by some athletes via social networks. The international athletics body said in a preamble: “The study revealed worrying levels of abuse towards athletes, including sexist, racist, transphobic and homophobic messages, as well as unfounded accusations of doping. It also unequivocally highlights that female athletes are more abused than their male counterparts.” The survey was conducted in collaboration with Threat Matrix, an initiative of data science company Signify Group Ltd and sports investigation company Quest Global Ltd. A sample of 161 Twitter accounts of current and former athletes, all involved in the Tokyo Games (from a list of 200 athletes selected by World Athletics), were tracked during the study period, starting one week before the opening ceremony and ending the day after the Games close (15 July – 9 August 2021). During this period, 240,707 tweets comprising 23,521 images, GIFs and videos were captured for analysis. The study looked for offensive slurs, images, emojis and other phrases that could indicate abuse. The results speak volumes about the reality of the problem. No less than 132 targeted discriminatory posts were found, from 119 authors. Twenty-three of the 161 athletes tracked were abused. Of these, 16 were female athletes. In total, 115 of the 132 posts (87%) identified as insulting were directed at female athletes. Finally, 63% of the insults identified were directed at just two athletes – black and female – the two most common categories of insults were sexist (29%) and/or racist (26%) in nature. These accounted for 55% of all insults identified.