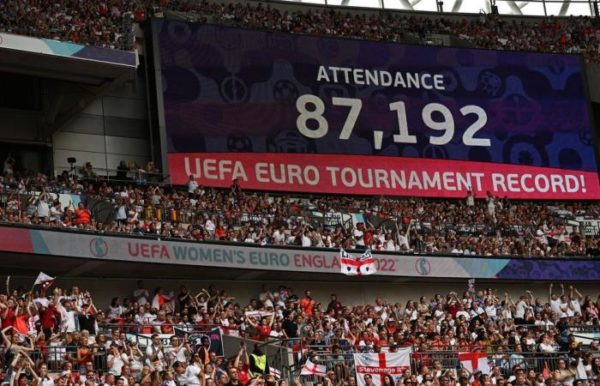 The figure speaks for itself. With 87,192 spectators at Wembley Stadium on Sunday, July 31, the England-Germany final of the Women’s Euro broke the attendance record for a European soccer championship match. It surpassed the best mark set for a men’s game, the 1964 Euro final in Spain, where the host country beat the Soviet Union in front of 79,115 spectators. The Women’s Euro 2022 did not wait for the decisive match on Sunday to set the record. The opening match, between England and Austria, had already made history with 68,871 spectators. As for the total attendance for the tournament – 574,875 fans – it smashed the best mark for the women’s continental competition, achieved in 2017 in the Netherlands with 247,041 spectators. But the record number of fans for a women’s soccer match remains solid on its feet: 91,648 spectators attended the Champions League semifinal between Barça and Wolfburg on April 23. Tickets were sold at 2.5 euros for the Spanish club’s subscribers and 9 to 15 euros for the others. For the Euro 2022 final at Wembley, tickets were on sale from 15 to 99 euros.