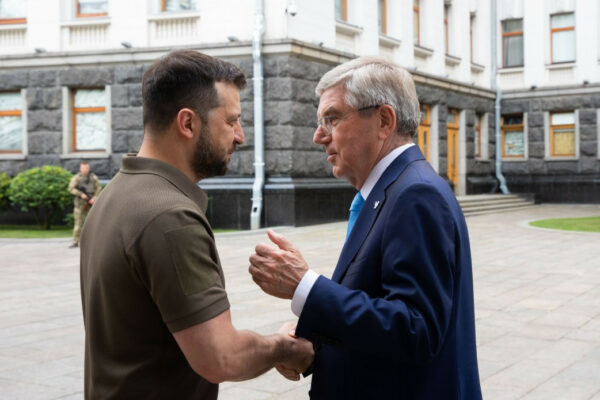 Sport and the Olympic Games came as a bit of a surprise on Tuesday 24 January during a telephone exchange between Ukrainian President Volodymyr Zelensky (pictured above with Thomas Bach) and his French counterpart Emmanuel Macron. The former asked the latter that Russia should not be present in less than 600 days at the Paris 2024 Olympic Games. The Ukrainian leader explained this himself on his Telegram account at the end of the conversation. “I particularly insisted that Russian athletes should not have a place at the Paris Olympics,” Volodymyr Zelensky wrote. The decision is obviously not up to the French head of state, but to the IOC. The Olympic body reaffirmed at the very beginning of the year through its president, Thomas Bach, that the sanctions against Russia and Belarus must be maintained. But at the same time, discussions are increasing to consider the return of athletes from both countries to international competitions, particularly with a view to qualifying for the Paris 2024 Games.