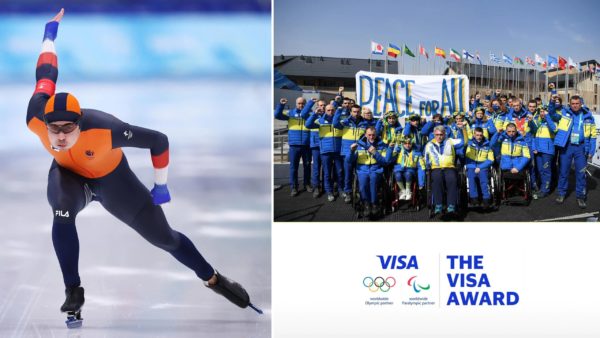 A new ritual. As the IOC’s global partner in the TOP programme, Visa has awarded its two prizes for the Beijing 2022 Winter Games. They were awarded to the Dutch speed skater Kai Verbij and the Ukrainian Paralympic team. Under the rules of the trophies, which were first awarded a year earlier for the Tokyo Summer Games, the two winners chose an organisation to receive a $50,000 grant. Kai Verbij chose UNICEF Netherlands. The Ukrainian Paralympic team selected the National Sports Committee for the Disabled of Ukraine. Visa also announced its decision to donate $50,000 to the IOC Olympic Solidarity Fund for the Ukrainian Olympic Community, plus a further donation of the same amount to the National Paralympic Committee of Ukraine. The two winners were chosen by internet users, who were asked to select the most inspiring moments from the last Winter Games. Kai Verbij received the most votes for his attitude during the 10,000m final at the Beijing Games, when he decided not to jeopardise the medal chances of his opponent, Canada’s Laurent Dubreuil, by making a risky overtake in the final straight. As for the Ukrainian Paralympic national team, they were unsurprisingly chosen to receive the Visa award, their entrance into the stadium at the opening ceremony of the Beijing 2022 Paralympic Games having been one of the highlights of the competition, just days after the Russian army began invading the country. It eventually finished second in the medal table. The Visa award was introduced for the first time at the Tokyo 2020 Games. It was won last year by Brazilian skateboarder Rayssa Leal and New Zealand javelin thrower Holly Robinson.