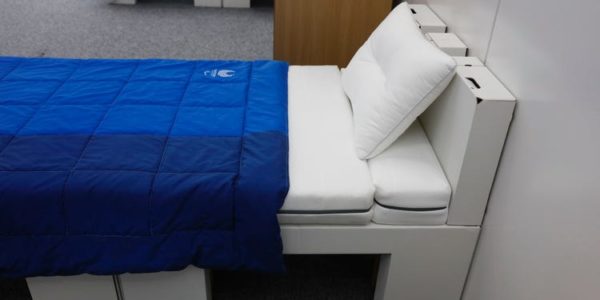 In Japan, the legacy of the Tokyo Games is not long in coming. But it is taking an unexpected form. The governor of Osaka Prefecture, Hirofumi Yoshimura, said over the weekend that he would like to get the cardboard beds used in the athletes’ village for patients infected with COVID-19. The beds are expected to be transported to Osaka by the end of September and then installed in a temporary medical facility put in place by the prefecture to make up for the lack of space in the city’s hospitals. “These beds were intended for Olympic athletes and they are of high quality,” explained Hirofumi Yoshimura. The operation could involve up to 800 of the 18,000 beds installed in the village, but also pillows used during the Tokyo Games. The official bedding supplier for the Tokyo 2020 Games, Airweave Inc, has already told prefectural authorities that it is ready to donate the beds to the temporary hospital, which is to be built in an exhibition centre in Osaka.