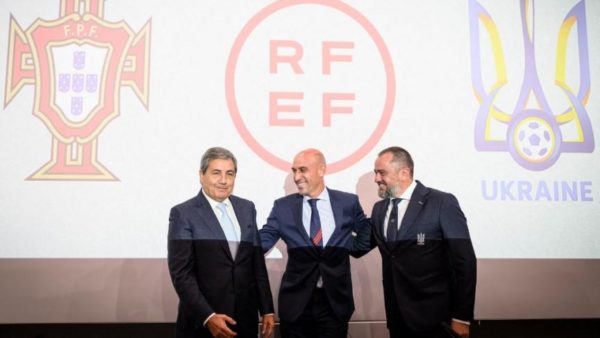 It’s official: Spain and Portugal’s joint bid for the 2030 FIFA World Cup has added a new country. Not the least of which is Ukraine. The news was revealed the day before by the Spanish government spokeswoman and confirmed on Wednesday 5 October at a press conference of the three countries at UEFA headquarters in Nyon, Switzerland. The Spanish Football Federation (RFEF) president, Luis Rubiales, described the three-country project as a “European bid” and was quick to stress the “transformative power of football in society“. Fernando Gomes, his Portuguese counterpart, explained at a press conference: “Ukraine cannot disappear from our memory after the end of the war. Helping Ukrainians means integrating them into projects of this dimension, giving them hope for the future.” Ukrainian President Volodymyr Zelensky commented on the announcement on his Twitter account, calling it “more than a symbol of faith in our common victory. Ukraine will endure, prevail and be rebuilt through the solidarity of its partners.” In practice, the addition of Ukraine to the project that Spain and Portugal have been working on for more than a year looks complex, but its symbolic value gives it an undeniable added value, two years before FIFA’s decision, expected in 2024. The European bid, supported by UEFA, will have to compete with a four-way bid from South America, including Uruguay, Argentina, Chile and Paraguay. A third bid could emerge in the coming weeks or months, but with much weaker chances. It would involve Egypt, Saudi Arabia and Greece.