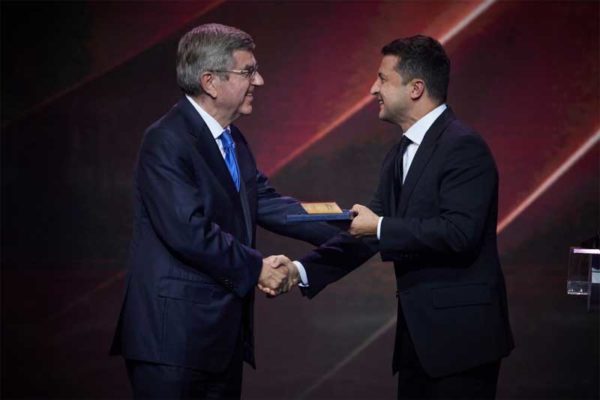 It is now official: Ukraine has joined the list of countries in the running to host the Winter Olympics. The Ukrainian president, Volodymyr Zelensky, announced this himself to Thomas Bach (photo above) on Saturday, September 11th, during a visit to Kiev by the German leader. Thomas Bach was invited to the ceremonies marking the 30th anniversary of the creation of the Ukrainian Olympic Committee. He brought back from this express trip the promise of the country’s political authorities to take part in the dialogue phase with the IOC, the first stage in the new process to designate host cities for the Games, both summer and winter. Volodymyr Zelensky also assured Thomas Bach that a Ukrainian delegation would travel to Lausanne as soon as possible. “We are convinced that together we can make our dream come true,” suggested Volodymyr Zelensky in his address to the National Olympic Committee. “The big dream is to have the Olympic Games in Ukraine and I really believe in it. I am sure that our great state deserves to host the Olympic Games.” Ukraine had submitted a bid for the 2022 Winter Games. It was led by the city of Lviv in the west of the country, but Russia’s military intervention in Crimea forced the Ukrainian authorities to withdraw. With the announcement of its wish to join the dialogue phase with the IOC, Ukraine enters the campaign for the 2030 Winter Games, a race in which Japan (Sapporo), the United States (Salt Lake City), and Spain (Barcelona and the Pyrenees) are already lining up. Canada (Vancouver) could also enter the race.