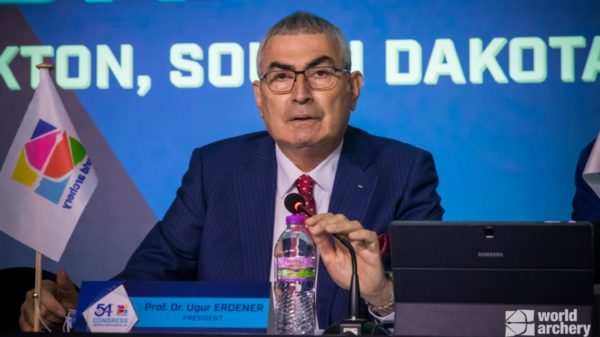 And that’s five for Ugur Erdener. The Turkish leader was re-elected on Saturday, September 18th, for a new mandate, his fifth, as president of the International Archery Federation (World Archery). He arrived at the head of the body in 2005 and will remain in place until 2025, after the Paris 2024 Games, i.e. a twenty-year lease. But this fifth mandate, obtained unanimously by the voters, will be his last. IOC Vice-President Ugur Erdener is not afraid to hold several positions within the sports movement, as he also chairs the Turkish Olympic Committee. Since he took office, archery has modernised its structures and calendar, with the creation of the World Cup in 2006, and changed the name of its body three years later, with the FITA (Fédération internationale de tir à l’arc) abandoning its French name to become World Archery. During the same elective congress, held in Yankton, USA, Colombian Maria Emma Gaviria was re-elected and South Korean Thomas Han was elected as vice-president.