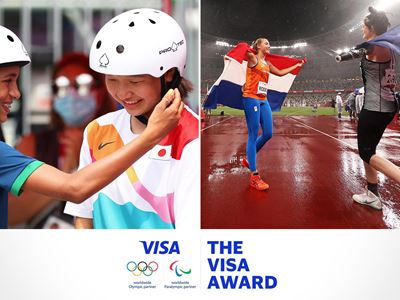 A novelty in the Olympic and Paralympic world. The Visa Award, initiated by the American company and member of the IOC TOP programme, is being awarded for the first time this year. It celebrates “the highlights of the Olympic and Paralympic Games outside the competition arena, moments that demonstrate the qualities of friendship, inclusion, acceptance and courage”. One moment is chosen by the public, via an online vote, for each of the two events. The prize is a cheque of $50,000. Surprisingly, the winner doesn’t get the money from Visa. They must nominate a charity to receive the money on their behalf. The IOC unveiled the first class of this new prize on Tuesday, October 12th. For the Tokyo Olympics, 13-year-old Brazilian skateboarder Rayssa Leal was chosen by the fans, “because of the sportsmanship she showed towards her opponents in Tokyo.” The young athlete chose to donate her $50,000 prize money to the Brazilian organisation Social Skate, which is very active with young people in the Calmon Viana neighbourhood in the city of Poá in São Paulo. For the Paralympic Games, the winner is New Zealand javelin thrower Holly Robinson, who won the Tokyo Games in the F46 class. She won over the voters “for generously thanking the competition officials and including them in the winners’ ceremony.” Holly Robinson chose the Ronald McDonald House South Island Mission in New Zealand, which is dedicated to creating, finding and supporting programmes that directly improve the health and well-being of children and their families. The Visa award will return for the Beijing 2022 Olympic and Paralympic Winter Games.