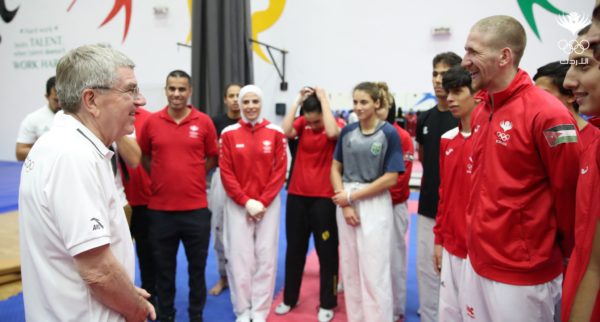 After Israel and before Egypt, Thomas made a stop in Jordan. On his first visit to the Kingdom since his election in 2013, the IOC President sped through the day. He visited the Za’atari refugee camp, where he took part in sports activities at the UNICEF Makani centre, met with representatives of the United Nations High Commissioner for Refugees (UNHCR), before signing a new collaboration agreement with Prince Feisal Al Hussein, President of the Jordanian Olympic Committee (JOC) and member of the IOC Executive Board. It provides for the renewal of the partnership between the Olympic Refugee Foundation (ORF) and Generations for Peace (GFP) for three years. The new partnership is expected to provide more than 3,000 sports activities for 15,000 young refugees in the Za’atari and Azraq camps. Thomas Bach and Feisal Al Hussein rounded off their first day in Jordan with a visit to the Olympic Preparation Centre (OPC) in Amman (photo above). Opened in 2018, it houses a multi-purpose sports hall, a fitness centre, a clinic, and accommodation for over 100 athletes.