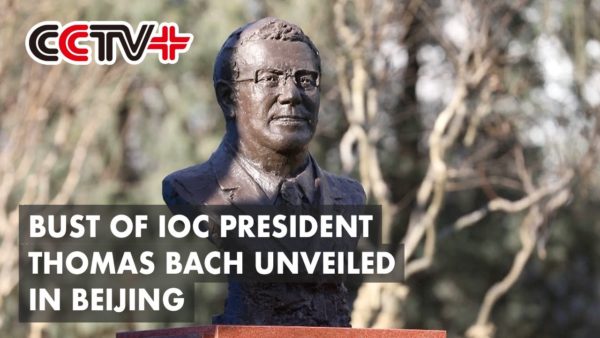 The Chinese love Thomas Bach. And they intend to show their devotion to him. The IOC president is now immortalised in a bust of him, proudly installed in Dongsi Olympic Park, in the Dongcheng district in the heart of the Chinese capital. The bust, by sculptor Yuan Xikun, was unveiled in his absence earlier this week by the vice-president of the IOC and the Beijing 2022 Organising Committee, Yu Zaiqing of China. The bust is accompanied by a very neutral annotation, written in English and Chinese: Thomas Bach, ninth president of the International Olympic Committee. At the Olympic Park in Beijing, Thomas Bach joins three former IOC presidents who were statued before him by the Chinese authorities: Pierre de Coubertin, Juan Antonio Samaranch and Jacques Rogge. Like Thomas Bach, the Spaniard and the Belgian had a very direct link with China and its Olympic movement. The former was president of the IOC when Beijing was awarded the Summer Games in 2008, the latter was its head during the Olympic event.