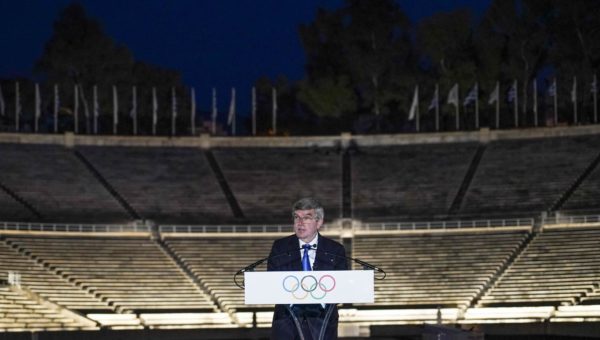 Symbolic. For his first trip outside Switzerland since his re-election as IOC President, Thomas Bach visited Greece, the cradle of Olympism. The German leader wasted no time on the way, making a series of visits and meetings. After opening an exhibition on Monday March 29th at the headquarters of the Hellenic Olympic Committee, where he took a tour of the museum in the companion of Spyros Capralos, the president of the body and member of the IOC, he went to the Athens City Hall, to receive the city medal awarded by the mayor, Costas Bakoyiannis. That same evening, Thomas Bach inaugurated a new lighting system at the Panathenaic Stadium, the venue for the first Games of the modern era in 1896 (pictured above). The opportunity for the IOC President to highlight the words of Pierre de Coubertin: “Olympism calls for air and light for all“. The next day, a more political day, with meetings with the Greek President, Katerína Sakellaropoúlou, then the Prime Minister, Kyriákos Mitsotákis. During his visit, Thomas Bach also spoke with former Greek Prime Minister and member of the International Center for the Olympic Truce, George Papandreou, and former Greek President, Prokópis Pavlópoulos. He forgot no one.