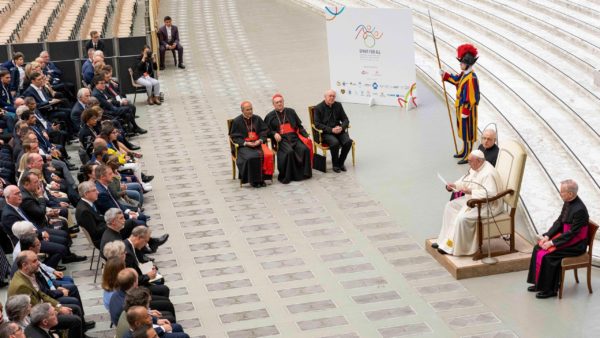 Last weekend in Rome, Thomas Bach not only met with Giorgia Meloni, the likely next Italian Prime Minister. The IOC President also went to the Vatican to participate in the International Summit on Sport. Over 200 representatives from the world of sport, including delegates from international federations and amateur sports associations, attended the two-day event on 29 and 30 September. Speakers included Filippo Grandi, the UN High Commissioner for Refugees, and Andrew Parsons of Brazil, President of the IPC. Thomas Bach took the opportunity to sign, alongside Pope Francis, a new declaration aimed at encouraging inclusion and access to sport for all. It “recognises the important role that sport plays in transforming these challenges into opportunities and, above all, in creating a more inclusive society in which everyone feels accepted and welcome, regardless of ability or disability.” On the sidelines of the Summit, the IOC President was invited to a private audience by Pope Francis. According to the official version, issued by the IOC, the two men spoke about sport and “its contribution to solidarity and peace in the world”. The Pope praised the initiatives taken by the IOC, in particular the support given to refugees through the Olympic Refugee Team and the Olympic Refuge Foundation (ORF).