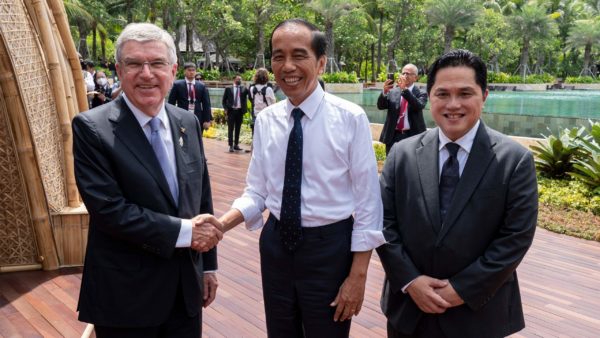 It was a double-edged trip for Thomas Bach in Bali. Present on the Indonesian island this week for the G20 Summit, the IOC President not only gave a speech on the political neutrality of the Olympic movement to the heads of state and government. He also took the opportunity to discuss the country’s bid for the 2036 Summer Games with Indonesian President Joko Widodo. The IOC explained in a press release that it “warmly welcomes Indonesia’s desire to host the 2036 Olympic and Paralympic Games in its new capital, Nusantara“. Thomas Bach continued: “Having attended a presentation of the Nusantara project and the progress already made, I am deeply impressed by President Widodo’s vision to develop this city as a model of sustainable living, with an emphasis on health and sport.” The Olympic body said its future host commission “will immediately contact Indonesia” through Indonesian IOC member Erick Thohir and National Olympic Committee president Raja Sapta Oktohari. The statement suggests that contact had not yet been established. Indonesia was one of the first countries to express its intention to bid for the Summer Games. It was already a candidate for the 2032 edition, awarded last year to Brisbane, Australia.