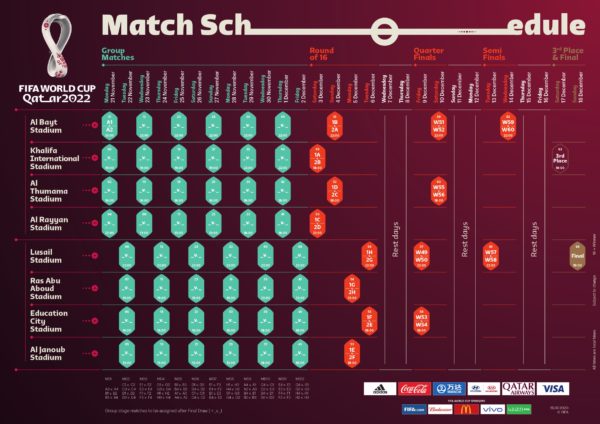 Unusual, even unheard of. According to several sources “close to the tournament“, quoted by AFP, the 2022 World Cup in Qatar will start a day earlier than originally planned. The opening match between Qatar and Ecuador has been rescheduled. It will take place on Sunday 20 November at the Al-Bayt stadium in Al-Khor, and not on Monday 21 November as announced several years ago. FIFA and the Qatari organisers have agreed to the change after the two nations concerned agreed. However, it is up to the FIFA Council Bureau to officially validate the change. The decision will revive a recent tradition whereby the first match is played by the host nation. The original schedule was for a daytime game between Senegal and the Netherlands on Monday 21 November, before Qatar and Ecuador in the early evening. “We wanted to follow the tradition that the defending champion or the host country should be involved in the opening match” a source told AFP on condition of anonymity. Another source, also unnamed, said “any disruption will be managed so that the impact is minimal” for spectators with tickets for the November 21 game. In the new schedule, the Netherlands-Senegal match on 21 November would be moved from 13:00 local time (10:00 GMT) to 19:00 (16:00 GMT). Jaime Byrom, president of Match Hospitality, the company chosen by FIFA to market the 2022 World Cup accommodation packages, said: “Compared to other challenges we might have faced or have faced in the past, this is really not a big issue. We are going to look after our Ecuadorian customers who are travelling from abroad, and make sure they arrive in time for the game.”