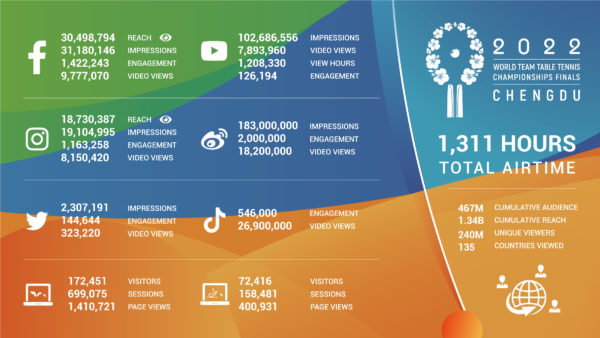 The numbers are staggering. According to data from the International Table Tennis Federation (ITTF), the three major tournaments on the world calendar held in China in October approached one billion viewers worldwide. The World Team Championships in Chengdu (30 September to 9 October), the WTT Champions in Macau (19 to 23 October) and the WTT Cup Finals in Xinxiang (27 to 30 October), the only international sporting events in China since the Beijing Winter Games, recorded a cumulative audience of 932 million people. As many as 255 million unique viewers watched at least one of the three events. Audiences in China, Japan and South Korea in particular reached record levels. The World Team Championships in Chengdu were broadcast in more than 130 countries and achieved a media breakthrough in relatively new markets such as Brazil, South Africa and India. According to Pierre Justo, Managing Director of CSM-Kantarsport, which is responsible for collecting media data for the ITTF, the 2022 edition’s audience is the best it has been in 15 years.