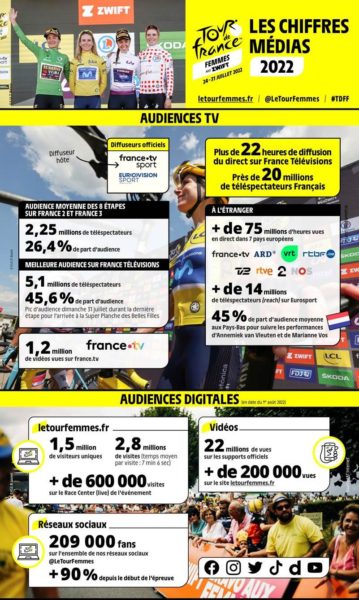 Figures do not lie: the first edition of the new Tour de France for women, held from July 24 to 31, 2022, was a success in terms of audience and attendance. Organizer of the stage race, the company A.S.O. has unveiled the media figures. They reveal, for example, that the audiovisual group France Télévisions devoted more than 22 hours of live coverage to the event, for a cumulative audience of nearly 20 million French viewers (an average audience of 2.5 million people for the eight stages on France 2 and France 3). Abroad, more than 75 million hours were seen live in seven European countries. The same media breakthrough was achieved for digital broadcasting, with 1.5 million unique visitors to the official website, letourfemmes.fr. As for the most watched video of the race on the Internet, it showed Cecilie Ludwig’s victory in Epernay, during the third stage, with over 400,000 views.