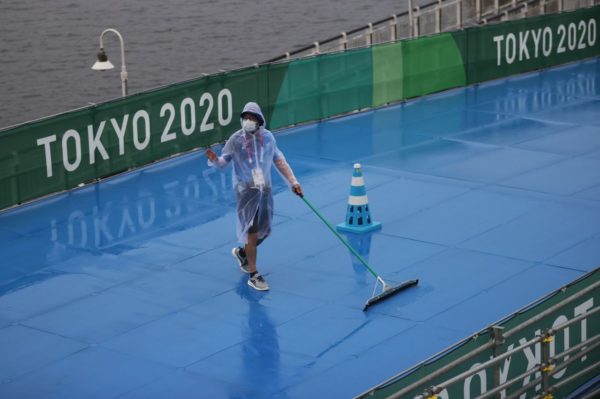 Weather alert on the Tokyo Games. A tropical storm is expected to hit northeastern Japan this Tuesday, July 27th, or more likely on Wednesday morning, according to the Japanese Meteorological Agency. Described as a typhoon by the Japanese media, Nepartak is heading towards the main island of the peninsula, Honshu, and could cause strong winds and high waves in several areas, including the greater Tokyo area. East Japan Railway Co. decided to cancel most high-speed trains between Tokyo and Yamagata Prefecture from Tuesday evening. However, there is no question of disrupting the Games’ program. The organizers announced that soccer matches would take place as planned in the whole country, notably in Miyagi (north-east), Ibaraki, Kanagawa and Saitama (east). The rowing and archery events had already been canceled for this Tuesday, July 27th, because of the gusts. As for the women’s triathlon, its start was delayed by 15 minutes because of the rain and wind (photo above).