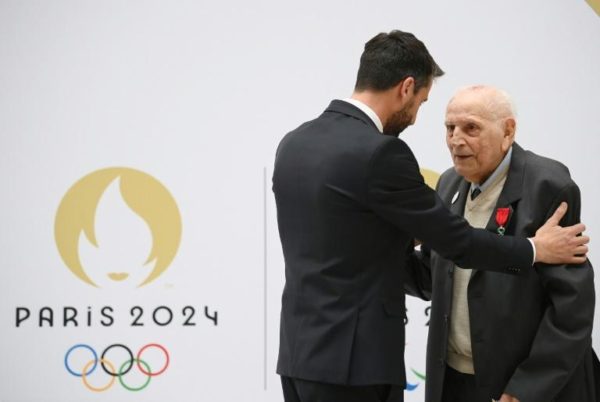 It is about time. France’s oldest living Olympic medallist, former track and field athlete Charles Coste, has been awarded the Legion of Honour. He is now 98 years old. Gold medallist in the team pursuit at the 1948 London Games (with Pierre Adam, Serge Blusson and Fernand Decanali, all deceased), Charles Coste received his decoration on Wednesday 13 April from Tony Estanguet at the headquarters of the Paris 2024 OCOG, the Pulse building in Saint-Denis. Since 1952, all French Olympic champions have received the Legion of Honour. At the London Games in 1948, this practice did not yet exist. Charles Coste applied for it. He learned on 31 December that he would finally be awarded the rank of Chevalier de la Légion d’honneur. Symbolically, he wanted this decoration to be given to him by Tony Estanguet, the president of the organising committee of the Paris 2024 Games where he hopes to celebrate his centenary. For the occasion, a few notes of the Marseillaise were played in the reception hall of the OCOG, a national anthem that Charles Coste had been deprived of in 1948. “I think the English had lost the record,” explained the former cyclist.