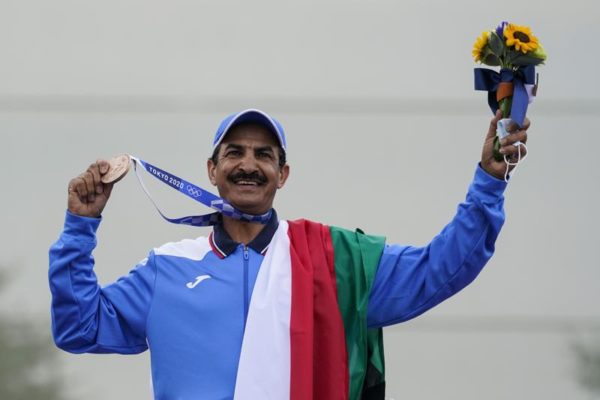 At 58, the Kuwaiti shooter Abdullah Al-Rashidi is competing in Tokyo for his seventh Olympic Games. On Monday, July 26th, he won the bronze medal in the skeet event, behind the American Vincent Hancock and the Dane Jesper Hansen. His second bronze medal, after the one won five years earlier at the Rio 2016 Games. But this time, Abdullah Al-Rashidi was able to cover himself with the Kuwaiti flag, which he had buried in his tracksuit before the competition. He even broke the Olympic protocol by taking it out of his pocket before the medal ceremony. At the Rio Games, his bronze medal had been accompanied by the Olympic flag, Kuwait being back then suspended by the IOC for interfering politically in the National Olympic Committee’s affairs . “I did not appreciate it”, explained the shooter during a press conference. “I wanted to see my flag, the Kuwaiti flag, not the Olympic flag.”