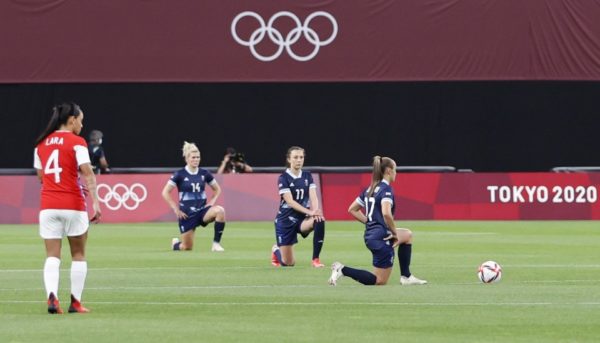 They had announced it, they kept their word. Two days before the official opening of the Tokyo Games, the players of the British women’s soccer team took advantage of the relaxing of rule 50 from the Olympic Charter. They put a knee on the ground, on the lawn, before the beginning of their match against Chile (2-0), on Wednesday, July 21st, in Sapporo. “In the team, it is a subject we’ve been talking about for a few weeks now”, had explained the British captain, Steph Houghton, on the eve of the match. “We want to express our willingness to fight against all forms of discrimination and inequality, not only in sport but in the world.” The Chilean players followed them by kneeling on the pitch. An hour later, the Americans and Swedes joined their movement before their match in Chofu. Will the Tokyo Games be the Games of freedom of speech for athletes around the world? The tone is already set.