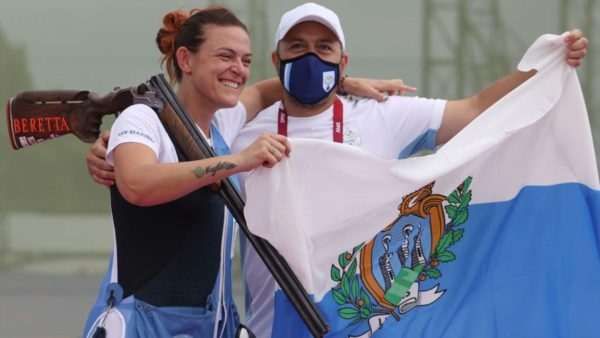 This is a historic day for the small state of San Marino at the Tokyo Games. For the first time since its entry in the Olympic movement, during the Games of Rome in 1960, it appears in the medals’ table, thanks to shooter Alessandra Perilli, bronze medalist in the Olympic pit. The young woman had finished tied with three other athletes for the second place at the London Games in 2012, but the medal slipped from her grasp during a shootout. Since its first appearance at the Games in Rome in 1960, San Marino has taken part in 25 editions of the event. It took 61 years to see one of its own on the podium. The bronze medal landed this Thursday, July 29th, by Alessandra Perilli, makes San Marino, 34 000 inhabitants, the least populated country to have won an Olympic medal.