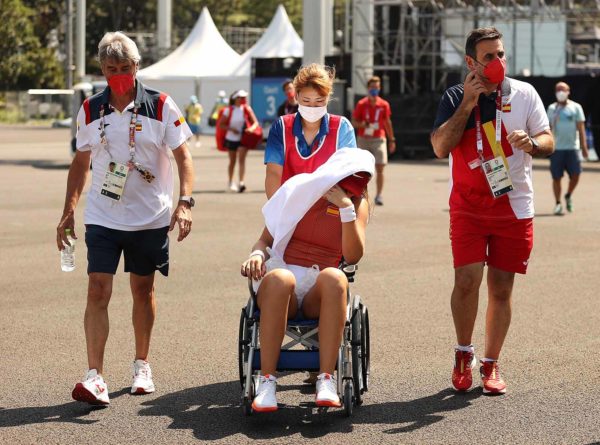 After the short tropical storm episode, the heat is back in Tokyo. The sun is beating down. And competition conditions are proving to be extreme, especially for tennis. At the request of many players, including the Serbian Novak Djokovic, the ITF has decided to change the tournament schedule. Starting this Thursday, July 29th, the first matches have been pushed back from 11:00 am, their initial schedule, to 3:00 pm. The change concerns the singles, doubles and mixed doubles draw. Daniil Medvedev, men’s singles World no.2, admitted to suffering from the heat during his third round match against Italy’s Fabio Fognini. “From the first set, I had difficulty breathing. I had to call the physio. I felt like my diaphragm was blocked. I couldn’t breathe properly. I think it was the wettest day we’ve had so far. In the second set, my eyes were in a blur. I was not far from collapsing on the court.” On Wednesday, July, 28th, Spain’s Paula Badosa suffered from heatstroke during her quarterfinal match against Marketa Vondrousova. Forced to retire, she left the court on a wheelchair (photo above). According to the Japanese press, a young volunteer also suffered from a serious heat stroke. The Japanese Meteorological Agency announced that the city of Tokyo would experience similar conditions over the next seven days, with maximum temperatures reaching 32 or 33° in the shade.