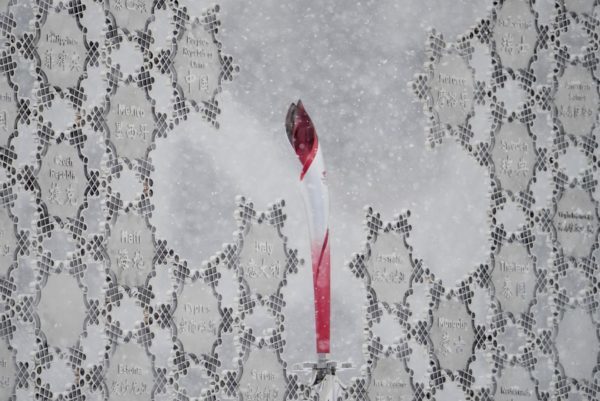 The Olympic flame was extinguished in front of the Bird’s Nest, the stadium of the 2008 Beijing Summer Games, as a result of the snowstorm that blew over Beijing and its surroundings on Saturday night and throughout the day on Sunday 13 February. An image taken by a photographer from the American daily USA Today shows the flame being extinguished in the Chinese capital’s Medals Plaza (photo above) early Sunday afternoon. It had been lit on Friday 4 February during the opening ceremony. The torch is supposed to burn for the duration of the Games, until it is extinguished on the closing night, Sunday 20 February. When asked by the media about this unusual incident, the organising committee denied the evidence. “Our Bird’s Nest team said the Olympic cauldron and the flame are fine, organizers responded in an email to USA Today. Maybe it is (the) snowing which affected the visibility.” At the 1976 Summer Games in Montreal, a storm extinguished the flame. It took a stadium technician to relight it with a lighter and some newspaper.