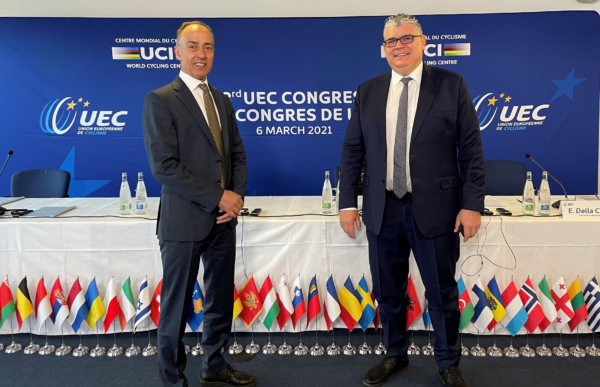 The presidents succeed one another at the head of the European Cycling Union. After the French David Lappartient (2013-2017), and the Swiss Rocco Cattaneo (2017-2021), the continental body goes under the Italian flag. Enrico Della Casa, 53, (pictured above, right), was elected as president of the UEC for a four-year term (2021/2025) at the annual congress, held virtually. In the process, the new UEC steering committee appointed Russian Alexander Gusyatnikov, Danish Henrik Jess Jensen, and Portuguese Delmino Albano Magalhães Pereira, for the three positions of vice-president. Briton Alasdair MacLennan, for his part, succeeds Enrico Della Casa as secretary general. The directing committee also decided to set up its first women’s committee. It will be chaired by Belarusian Natallia Tsylinskaya.