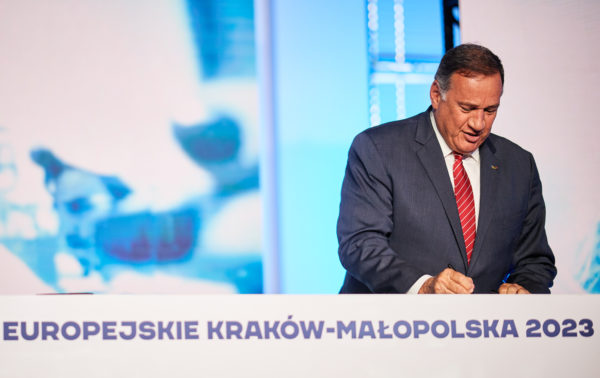 It’s done. Finally. With a year and a few weeks to go before the event, the Association of European Olympic Committees (EOC) has signed the Host City and Region Contract for the 2023 European Games with the authorities of the Polish city of Krakow and the Malopolska region. The document was initialled on Tuesday 17 May at a ceremony in Warsaw at the Polish Olympic Committee headquarters. The EOC made the trip in force, with a delegation led by its new president, Greek Spyros Capralos (photo above). The signing of the contract puts an end to a period of doubt about the financing of the event by the political authorities. It was made possible by the Polish government’s commitment to contribute its share of the Games’ budget and the support of the European Union (EU). As proof of this, the Minister of Sport and Tourism, Kamil Bortniczuk, stated in a press release: “We have completed the operation to secure the funds, which will allow the implementation of the necessary investments, both in the field of sport and infrastructure. We have allocated 250 million zlotys (about 54 million euros) for sports investments only.” The third edition of the European Games is scheduled to take place from 21 June to 2 July 2023 in Krakow and the Malopolska region. The programme includes 26 sports, 18 of which are Olympic, where the road to the Paris 2024 Games will pass through the European Games. In addition, no fewer than eight Olympic sports will hold European championships as part of the continental event in Poland, including the European Athletics Team Championships.