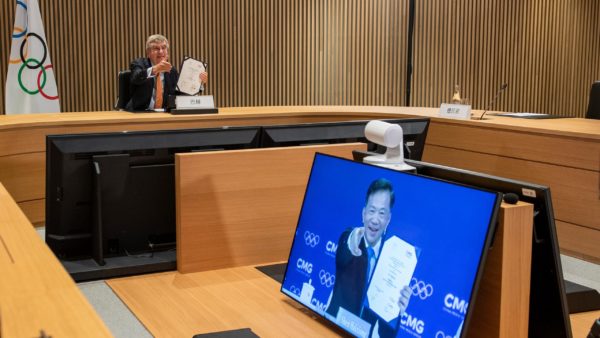 The name changes, but the habits remain. The IOC has announced that it has awarded the Chinese broadcasting group CMG (China Media Group) exclusive rights for China and Macau for the Olympic Games between 2026 and 2032, namely Milan-Cortina 2026, Los Angeles 2028, a host to be determined for the winter of 2030, and finally Brisbane 2032. Nothing new then, since CMG is the new name of CCTV, which has held the rights to the Games since the 1980s as part of its agreement with the Asian Broadcasting Union (ABU), and then directly with the IOC since Beijing 2008. The Chinese group has acquired the rights for all broadcasting platforms – free-to-air, pay-TV, internet and mobile. The agreement also includes the broadcasting rights for all editions of the Youth Olympic Games until 2032. According to Shen Haixiong, its president, CMG has sent a team of nearly 800 people to the Tokyo 2020 Games. The Chinese group is preparing to launch an Olympic channel this year, presented as the world’s first to broadcast in 4K+HD format, seven days a week, 24 hours a day. For the Beijing 2022 Games, CMG will broadcast in Ultra HD 8K.