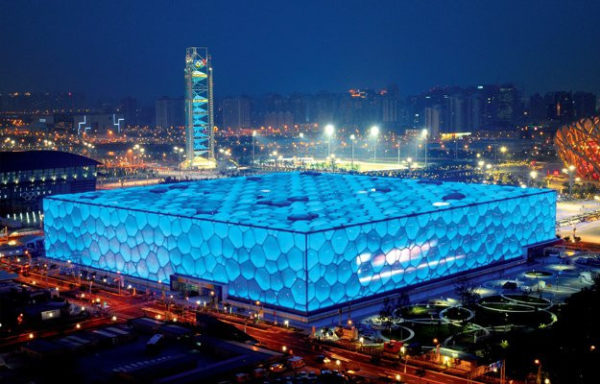 The Chinese promised to recycle as much of the equipment used 14 years earlier at the 2008 Summer Games for the Beijing Winter Games. They have kept their word. Top of the list of venues converted from summer to winter is the National Aquatic Centre. The stunning Water Cube of Beijing 2008, host of the swimming events, has been transformed into a striking Ice Cube. It houses the Olympic curling tournament. Yang Qiyong, its general manager, told a press conference on Thursday 10 February about the process the organisers used to successfully convert the water into ice. “For the Beijing 2022 Games, we had the idea from the beginning to build an ice rink above the pool,” he explained. The advantage: a reduction in costs. And, above all, the implementation of a protocol that can be duplicated in the rest of the country to develop ice sports. For the first tests, the manoeuvre required 20 days of work. It was then reduced to 18 days. A Canadian expert from the International Curling Federation (WCF) was sent to Beijing to assist the Chinese. A technician from the Japanese federation was also called in. The result was quite convincing. According to Yang Qiyong, this new structure should contribute to boost the practice of curling in China, which was embryonic before the Beijing Games, but has an unsuspected potential. The Ice Cube will become a swimming pool again at the beginning of next spring, and will change back into an ice rink as winter approaches.