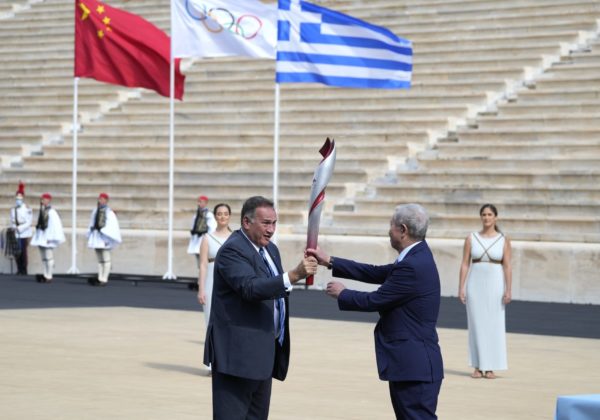 It’s done. With less than four months to go before the opening of the Games, the Chinese have received the Olympic flame for the Beijing 2022 Winter Games (February 4th to 20th). The handover took place behind closed doors on Tuesday, October 19th, at the Panathenaic Stadium in Athens, just like the day before in Olympia for the torch-lighting ceremony. Spyros Capralos, President of the Hellenic Olympic Committee, handed over the torch to Yu Zaiqing, Vice-President of the Beijing 2022 Organising Committee (photo above). The lantern containing the precious torch was then brought on a plane to China. It is due to arrive in Beijing on Wednesday. “The Olympic flame will travel to the Great Wall and through other parts of China, bringing with it the light of peace and friendship,” Yu Zaiqing solemnly declared. But for that, he will have to wait. Unsurprisingly, the torch relay ceremony was disrupted by further protests against the Winter Games being held in China. Uyghur activists held a press conference before the torch was passed to reiterate their opposition to the event. “It’s sport-whitening. There is no legitimate reason to host the Games during a genocide,” suggested Zumretay Arkin, head of the World Uyghur Congress. Activists say the Games will promote a regime whose abuses have increased since the 2008 Beijing Games, especially against Hong Kong residents, Tibetans and Uighurs. They are said to be subject to “Orwellian” surveillance by the communist authorities.