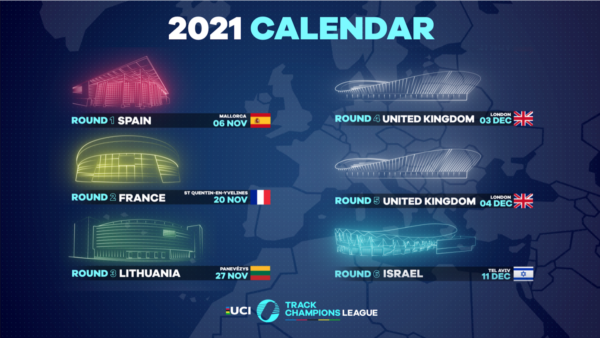 New elements were unveiled on Tuesday, May 18th, about the future Champions League, the track cycling world circuit launched by the UCI and the Eurosport group. The schedule for the first edition, planned for this year, was disclosed during a live digital event, broadcast live from Saint-Quentin-en-Yvelines, near Paris, and Bath, in the United Kingdom. The competition will begin on November 6th, 2021, with the first of six international stages. It will be held in Palma de Mallorca, (Balearic Islands), in a 5,200-seat velodrome that hosted the 2007 Track Cycling World Championships. The second stage will take place on November 20th in France, at the Vélodrome National de Saint-Quentin-en-Yvelines, where Paris 2024 track cycling competitions will take place. The world’s best track cyclists will then travel to Panevezys, Lithuania (November 27th), then to London, to the Lee Valley VeloPark, built for the 2012 Games (December 3rd-4th), before completing their European tour with a final stop in Tel Aviv, Israel, on December 11th. As a reminder, the UCI Track Champions League offers the same race program for each of the six rounds. Riders score points over the six stages in either the Sprint (sprint and keirin) or Endurance (elimination and scratch) categories. Eighteen riders will compete in each category, for a total of seventy-two riders, men and women in equal numbers.