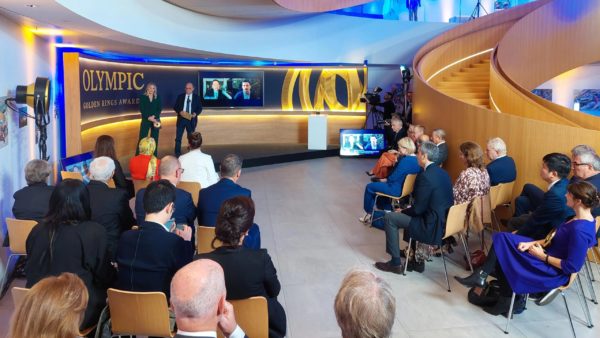 As the end of the year approaches, it is time for trophies and awards in the Olympic movement. The IOC took the lead in awarding its 2022 Olympic Golden Rings on Wednesday 30 November at Olympic House in Lausanne. They reward the best audiovisual coverage of the Beijing Winter Games. The trophies were awarded to the official rights holders of the Games in nine categories, including: “Best athlete portrait“, “Best example of equality and inclusion“, “Best reportage/documentary”, “Best innovation/scenography”, “Best Olympic programme”, “Best promotion on a broadcast platform”, “Best social media and fan engagement” and “Most sustainable broadcast operation“. Among the winners were the Americans Warner Bros. Discovery, chosen in the “Best Innovation/Scenography” category, and NBCUniversal, which left the ceremony with five trophies, including gold for “Best Example of Equality and Inclusion” for its portrayal of bomber Elana Meyers Taylor and “Best Promotion on a Broadcast Platform” for “Superfan“. Other big winners were China Media Group, which won four awards, including gold for Most Sustainable Broadcast Operation and Best Olympic Programme, and CBC/Radio-Canada, which won two gold trophies in the categories of Best Athlete Portrayal and Best Feature/Documentary. The winners were selected from 50 entries by an international jury chaired by Indian IOC member Anant Singh, producer of two Oscar-nominated films. Created in 1976, the Olympic Golden Rings competition is held every two years, after the Summer and Winter Olympic Games.