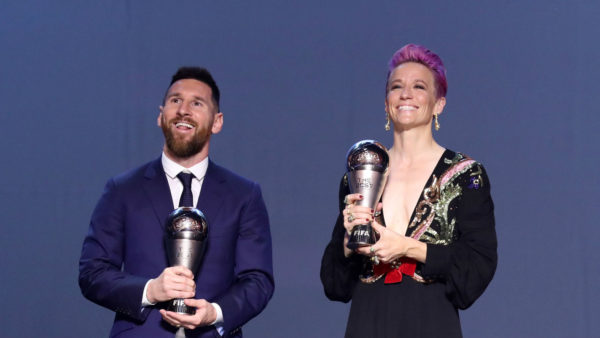 The Americans won. Finally. The US Soccer Federation has announced that it has decided to pay the women’s national team the same level as the men’s team in the future. The new equal pay deal, achieved after a long legal battle by a group of 28 international players, covers all friendlies and tournaments, including the World Cup. The agreement is worth $24 million, of which $22 million is to be distributed according to a scale and principle proposed by the players. Its implementation will now depend on the ratification of a collective agreement between US Soccer and the internationals. Once this is ratified, the lawsuit will be over. The activist players did not wait to react to this victory. Megan Rapinoe (pictured above, with Lionel Messi), captain of the 2019 US World Cup-winning team, told ABC: “Obviously we can’t go back and undo the injustices that we faced, but the only justice coming out of this is that we know that something like this is never gonna happen again” For sure. The same sense of victory for striker Alex Morgan: “I not only see this as a win for our team or women’s sports but women in general. It’s just an incredible day and a day that we’re all really proud of.“