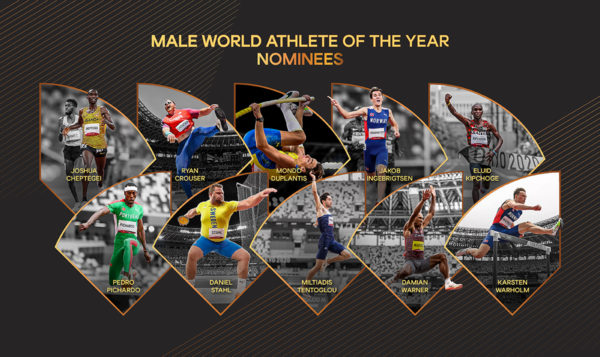 The battle for the coveted title of Male Athlete of the Year, which will be awarded in December by World Athletics, promises to be intense. The international body has unveiled the list of the 10 nominees. It is exceptional, reflecting an Olympic season in which several world records were broken. The Athlete of the Year award will be contested by Joshua Cheptegei of Uganda (5,000 and 10,000m), Ryan Crouser of the United States (shot put), Mondo Duplantis of Sweden (pole vault), Jakob Ingebrigtsen of Norway (1,500m), Kenya’s Eliud Kipchoge (marathon), Portugal’s Pedro Pichardo (triple jump), Sweden’s Daniel Stahl (discus), Greece’s Miltiadis Tentoglou (long jump), Canada’s Damian Warner (decathlon), and Norway’s Karsten Warholm (400m hurdles) Unusually, six of the ten nominees are from a European country, including four from Scandinavia, but only one American is on the list. Three favourites have emerged: Mondo Duplantis, Eliud Kipchoge and Karsten Warholm. The finalists will be determined by a three-tiered voting process: World Athletics Council members and the athletics “family” will vote by e-mail, while fans will be able to vote online via social media. The Council vote will count for 50%, with the family of athletics and the public each counting for 25% of the final result. Voting closes on Saturday November 6th, at midnight. The winners will be announced at the World Athletics Gala, to be held in December.