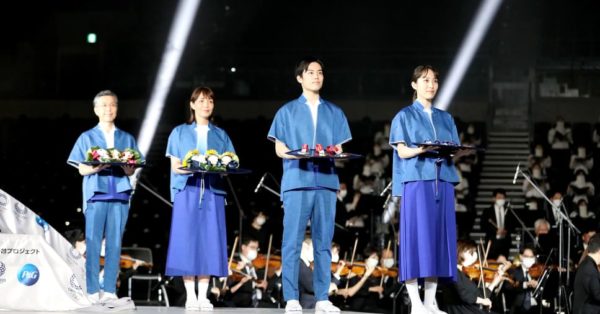 Perfect timing. The organisers of the Tokyo Games took advantage of Thursday’s date (June 3rd, or 50 days to go before the beginning of the Olympics) to unveil the decorum of the medal ceremonies. As announced, it will be marked by a desire to respect the environment. The podiums, designed by artist Asao Tokolo, were made from plastic waste. No less than 24.5 tonnes of recycled plastic – the equivalent of 400,000 bottles of detergent – were collected to create the 98 podiums. The shiny symbols embedded in the podiums were also made from waste, using aluminium from temporary homes built in the areas affected by the tsunami and the Fukushima nuclear disaster. The rest of the podium design was inspired by the traditional Japanese checkerboard pattern used by Asoa Tokolo to create the emblem of the Tokyo Games. The outfits of the 500 volunteers who will participate in the 878 medal ceremonies (339 at the Olympic Games, 539 at the Paralympic Games) are indigo blue, one of the basic colours of the Games. The official music for the ceremonies was created by Japanese composer Naoki Sato, known in Japan for his film scores.