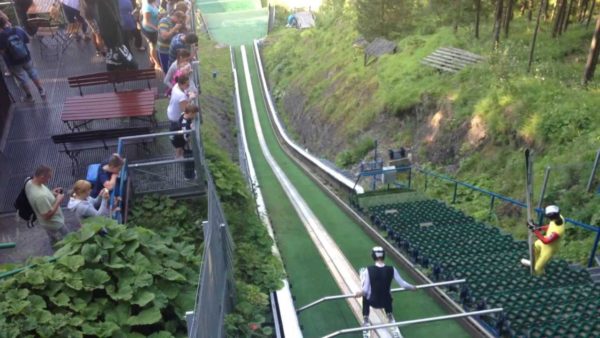 Every week means a new announcement for the 2023 European Games. An announcement and a surprise. After padel and teqball, the last two sports to be included in the event, the Association of European Olympic Committees (EOC) has added summer ski jumping to the programme. Which means without snow. The discipline has been officially added to the next edition of the continental event, scheduled for Poland in 2023. It becomes the 17th sport added to the programme. The EOC states that the International Ski Federation (FIS) organises an annual Summer Grand Prix in ski jumping, with one stage taking place in Zakopane (photo above), Poland, where the competition will be held for the 2023 European Games. Five individual and team events for men and women will take place in Poland. The programme of the 2023 European Games becomes even more extensive with this addition. But it also deviates a little more the from usual standards, since it now includes, in addition to summer ski jumping, 3×3 basketball, archery, badminton, beach handball, boxing, canoeing, cycling, karate, modern pentathlon, muaythai, padel, shooting, sport climbing, taekwondo, teqball and triathlon.