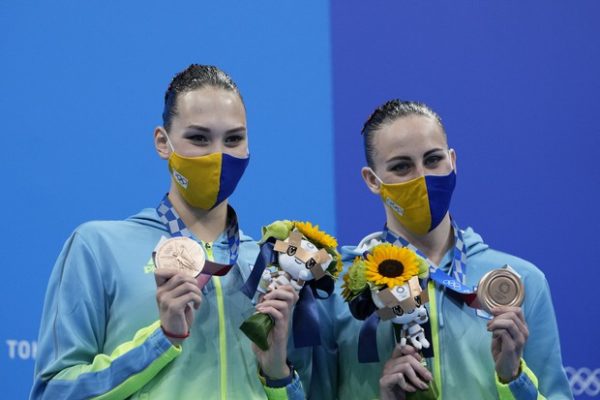 Diplomatic incident at the Tokyo Games. The two bronze medallists in the synchronised swimming duet event, Ukrainians Marta Fiedina and Anastasiya Savchuk (pictured above), were announced as Russians during the podium ceremony. This is rather embarrassing for the Japanese organisers given the political tensions between Russia and Ukraine. “This is a purely operational error,” explained the organising committee’s spokesman Masa Takaya on Thursday, August 5th, the day after the competition. The duet event was won by two swimmers from the Russian Olympic Committee (ROC) team, Svetlana Romashina and Svetlana Kolesnichenko. “The announcement in French of the medal winners should have been Team Ukraine, but ROC was said instead,” said Masa Takaya. Of course, people noticed and the person in charge of the announcements apologised. “I would also like to apologise to all members of the Ukrainian team”. Announcements at the Olympic venues are made in Japanese and English, but French is also used for the podium ceremonies as the official language of the Olympic movement.