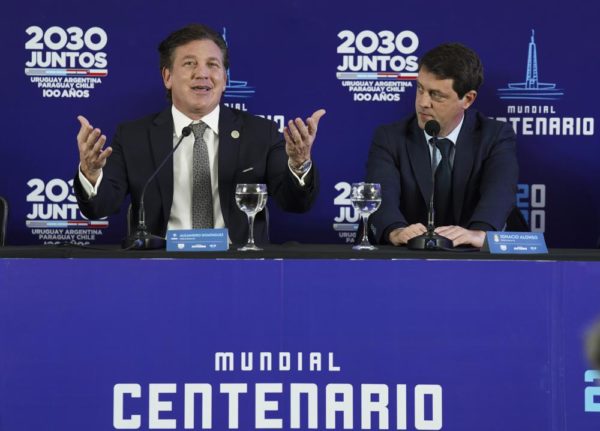 It’s done. Uruguay, Argentina, Chile and Paraguay officially launched their joint bid to host the 2030 FIFA World Cup on Tuesday, August 2. The launch took place at the Centenário stadium in Montevideo, Uruguay, where the first World Cup final was held in 1930. Heading the list of speakers was the Uruguayan president, Luis Lacalle Pou, host of the event and a strong supporter of the project. Alejandro Domínguez (pictured above, left), president of the South American Football Confederation (CONMEBOL), set the tone of the four countries’ ambition at the press conference: “One hundred years is an anniversary that will only happen once. We need the World Cup to come home. We believe that this is more than enough reason for FIFA to accept this bid and even make it the only one.” An ambition that must not have been very well received in southern Europe by the other project in the running, the joint bid of Spain and Portugal, supported by UEFA and its member federations. FIFA must designate within two years the host countries of the 2030 World Cup.