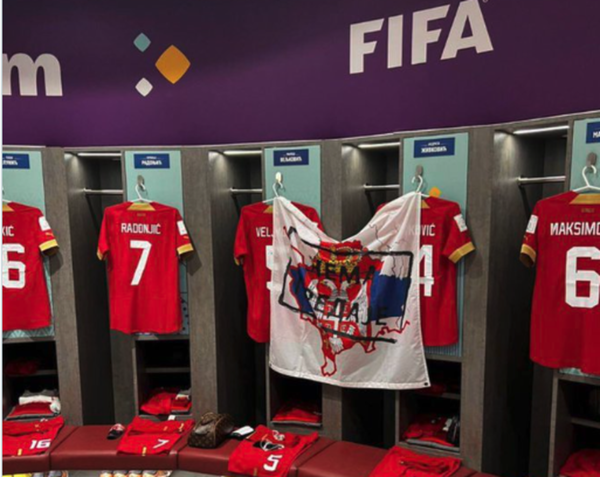 Diplomatic controversy at the 2022 World Cup in Qatar. FIFA has opened disciplinary proceedings against the Serbian Federation over a flag displayed in the national team’s dressing room before the match against Brazil last Thursday in Doha. It shows a map of Kosovo printed on a square of white cloth hanging on two pegs, with the words “There will be no surrender” (pictured above). The broadcast of the image was followed by an official protest from Kosovo, the day after the meeting, via its Sports Minister Hajrullah Ceku. He denounced “shameful images” relaying “hateful, xenophobic and genocidal messages“. He also explained that he expected “concrete action from FIFA“. Kosovo has been affiliated to FIFA and UEFA since 2016. For its part, the Kosovo Football Federation (FFK) announced that it had filed a complaint with FIFA against “Serbia’s aggressive action” during its first match at the 2022 World Cup. “Such an act has no place in sporting events and even less inside the stadiums where the world’s biggest football event is taking place,” the FFK said. FIFA did not cite a specific breach of its disciplinary code to justify the opening of its procedure, but it relies on the general obligation of “fair play and non-violence” imposed on the 32 participating teams. Possible sanctions range from a match behind closed doors to a forfeit.