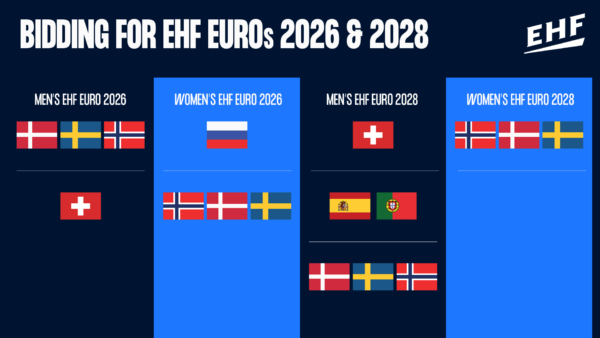 The European Handball Federation (EHF) can rejoice: its major event, the European Handball Championship, is still making people envious. The continental body has unveiled the list of candidates for the 2026 and 2028 editions. For three of the four men’s and women’s tournaments, the EHF has received at least two bids. At the top of the list is a strong Scandinavian alliance of Denmark, Norway and Sweden. The three countries are applying together, under the slogan “Scandinavia Connect”, for the four lots put in competition: the men’s Euro in 2026 and 2028, the women’s Euro in 2026 and 2028. Switzerland is also aiming high, with bids for the men’s European Championship in 2026 and 2028. Spain and Portugal have submitted a joint bid to host the men’s competition in 2028, with Lisbon on the Portuguese side (two groups in the preliminary round and one group in the main round) and Madrid, Valencia, Malaga and Ourense on the Spanish side. Finally, Russia is focusing its efforts on the men’s Euro in 2026, with matches scheduled in Moscow and St. Petersburg.