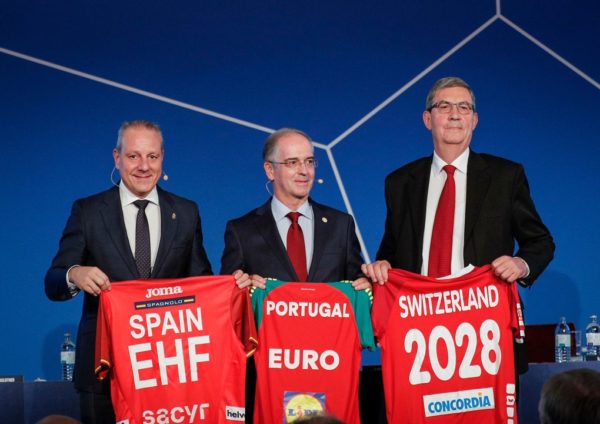 The heart of European handball will be tilted north during the next Olympiad. At an extraordinary congress, the European Handball Federation (EHF) awarded the men’s and women’s European Championships in 2026 and 2028 in one fell swoop. Two of the four continental tournaments will be held in three Scandinavian countries, united in joint bids. The trio of Denmark, Sweden and Norway have won the bid to host the Men’s Euro 2026 (15 January to 1 February) and the Women’s Euro 2028 (30 November to 17 December). Their concept, called “Scandinavia connect”, has been successful, with nine venues in nine different cities: Copenhagen, Herning and Aarhus in Denmark; Kristianstad and Malmö in Sweden; Stavanger, Trondheim, Bergen and Oslo in Norway. As for the rest, Russia has been awarded the right to host the Women’s Euro in 2026, an event that the Russians have never before organised. It will take place from 3 to 20 December 2026 in St Petersburg and Moscow, with a final weekend at the VTB Arena in Moscow. Finally, the continental handball body has entrusted the organisation of the 2028 Men’s Euro to a trio of countries formed by Portugal, Spain and Switzerland (pictured above). The tournament is scheduled to take place from 13 to 30 January 2028 in seven cities: Lisbon in Portugal; Basel, Lausanne and Zurich in Switzerland; Valencia, Barcelona and Madrid in Spain. Barcelona’s Palau St. Jordi, Madrid’s Wanda stadium and Real Madrid’s Santiago Bernabéu stadium are proposed as potential venues for the final weekend.