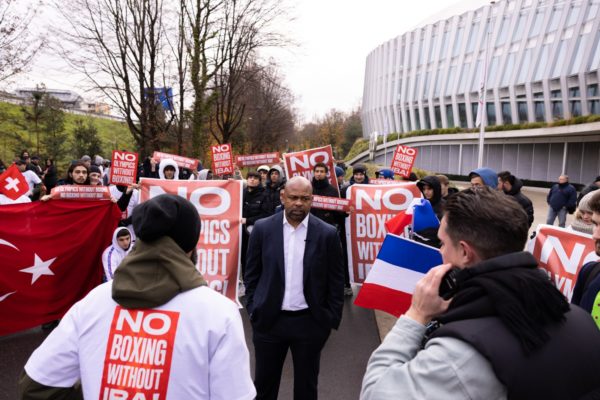 Faced with the threat of withdrawal from the Olympic programme, the boxing community chose to go on the offensive. It did so on Monday 5 December in a way that is not often seen in the international sports movement: by taking to the streets. The International Boxing Federation (IBA) revealed, with pictures, that a “peaceful” demonstration was organised in front of the Olympic House in Lausanne, at a time when the executive committee of the body was meeting to discuss, among other subjects, the future of the discipline. At the head of the procession, former American boxer Roy Jones Jr. (photo above, centre), a loyal ally of IBA president Umar Kremlev of Russia. Around 100 boxers and trainers from six countries – Switzerland, Germany, France, Poland, Malta and Israel – took part in the event, which was held under the motto: “No Olympic Games without boxing, No boxing without the IBA.” Roy Jones Jr, quoted in an IBA press release, said: “I wrote a letter to the IOC but received no reply. So I went to their door and knocked. I will do whatever it takes to be heard. Boxing must stay in the Olympics, and I will do everything for that. It is high time to end the injustice. People should see how AIBA has turned into the IBA, they should draw conclusions by actions, not words. The IBA deserves to be recognised by the Olympic movement as much as boxing deserves to be in the Olympic programme.”