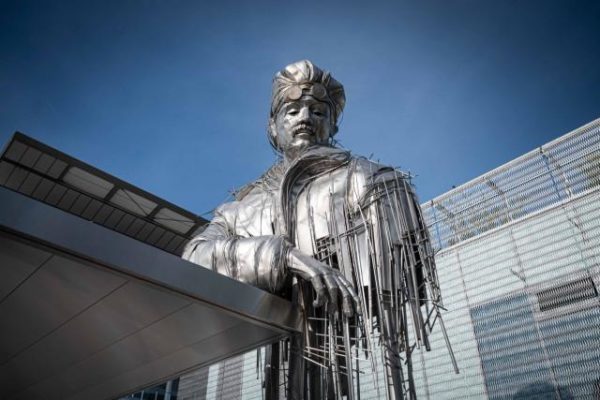 The modernisation of the Roland-Garros stadium does not prevent a nod to history. As proof, the revelation, Monday April 12th, of a statue of the aviator who gave his name to the place, but also to the French lifting of the tennis Grand Slam. It has just been installed in the stadium in the presence of the new president of the French Tennis Federation (FFT), Gilles Moretton, and the artist who made the sculpture, Caroline Brisset. The FFT explained in a press release that it “wished to pay tribute to this pioneer of French aviation and hero of World War I who gave his name to the stadium“. Made of steel, the work measures over six meters in height. It represents a portrait of Roland Garros, inspired by a photo where he poses leaning on the cockpit. Its name, “The cloud kisser”, refers to the nickname given to the French pilot, “The man who flirts with the clouds”. The statue will permanently take place on the brand new “aviator’s forecourt”, near the new general public entrance to the Roland-Garros stadium, called “gate 1”.