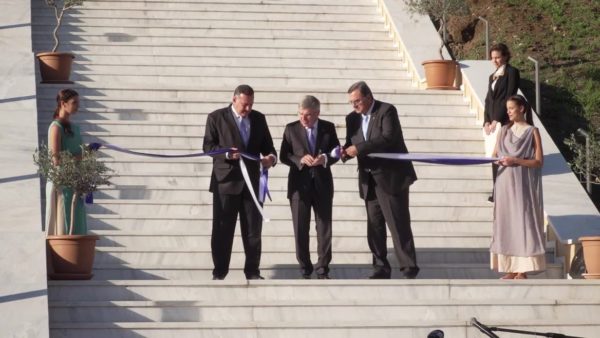 It’s done. As announced, the new International Olympic Academy was inaugurated on Sunday, October 17th, in Olympia, Greece. The ribbon was cut by Thomas Bach, with two personalities from the Greek Olympic movement: Isidoros Kouvelos, the President of the establishment, and Spyros Capralos, the President of the National Olympic Committee, which owns the premises (photo above). In the front row of the guests, the President of the Hellenic Republic, Katerina Sakellaropoulou. For this academy, created in 1961, the main aim was to carry out a vast renovation and modernisation plan. The project was launched in March 2020, after the lighting ceremony of the Olympic flame for the Tokyo 2020 Games at the ancient site of Olympia. The accommodation, conference rooms, restaurant, kitchen, library and sports facilities were completely renovated. The IOC picked up part of the tab with a contribution of 12.5 million euros. The mission of the International Olympic Academy is “to preserve and disseminate the principles of the Olympic spirit, to study and implement the social and educational principles of Olympism, and to consolidate the scientific basis of the Olympic ideal”. It welcomes young people, students, trainers, Olympic athletes, but also leaders and institutions. In its new, more modern and connected version, it can now also offer online training.