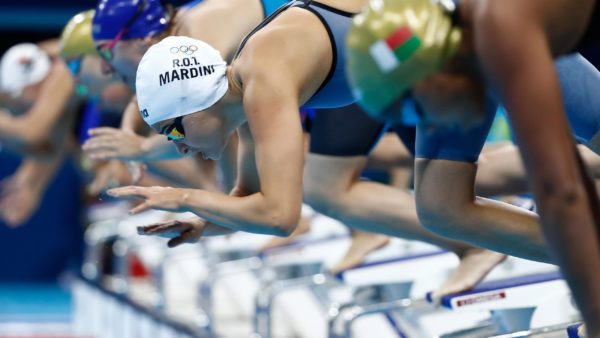 Unreleased. Yusra Mardini, a Syrian-born swimmer and member of the IOC’s first Olympic refugee team, is the heroine of a film, The Swimmers, which had its world premiere last week at the Toronto International Film Festival. The feature film produced by Working Title Films (Everest, Love at First Sight and Love Actually) will be screened on 22 September to open the Zurich Film Festival. Fleeing Damascus with her older sister Sara in the hope of finding refuge in Europe, Yusra Mardini found herself on a crowded dinghy in the Aegean Sea. When the engine broke down during the crossing, the two Syrian girls dove into the icy waters to pull the dinghy and allow their companions to reach land on the Greek island of Lesbos. Their journey ended in Berlin, where Yusra Mardini was able to resume swimming, before joining the IOC’s Olympic refugee team for the Rio 2016 Games. She then became the youngest ever UNHCR Goodwill Ambassador. The young Syrian made her return to the pool, again as part of the Olympic refugee team, at the Tokyo 2020 Games. The Swimmers was directed by BAFTA award winner Sally El Hosaini of Egyptian origin. The roles of Yusra Mardini and her sister Sara are played by Lebanese actresses Nathalie and Manal Issa, sisters both on and off screen. German actor Matthias Schweighöfer plays Yusra’s coach, Sven Spannenkrebs.