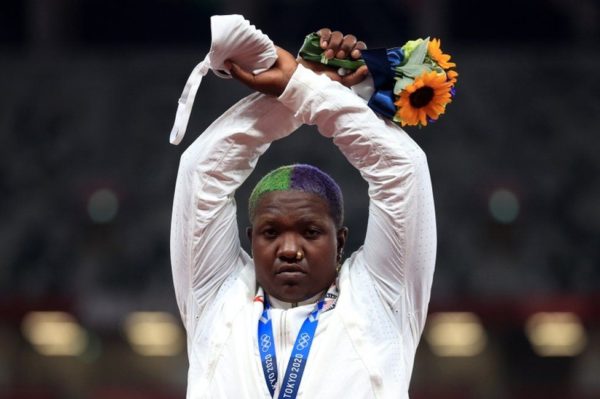 There’s a problem in sight for the IOC. The American athlete Raven Saunders, silver medalist in the Women’s shot put on Sunday, August 1st, violated the Olympic Charter. She took advantage of the medal ceremony to express an opinion on the podium, a step prohibited by the Rule 50 of the Olympic Charter. Very invested in the LGBT cause and in civil rights’ defense, the American formed an X with its two arms, after having received its silver medal. “My message is to continue to fight, to push and to find value in who you are, in everything you do,” she explained during a press conference before the podium ceremony. “It’s important for me to bring home this silver medal because I represent so many different people, I know there are a lot of people watching me, sending me messages and praying for me”. Before the Tokyo Games, the IOC announced its decision to relax the Olympic Charter’s Rule 50 regarding freedom of expression at the Games. After having consulted more than 3 600 athletes in the entire world, the authority had decided to authorize the expression of an opinion, political, religious or racial, within the scope of the Games, but not on the podium. The athletes can now do it on social networks or in the media. With this gesture, Raven Saunders has clearly violated the rules. Will she be sanctioned? Questioned this Monday during a press conference, the spokesman of the IOC, Marks Adams, explained that the decision will be taken after discussing with World Athletics and the American Olympic and Paralympic Committee (USOPC). It’s about to be a delicate matter.