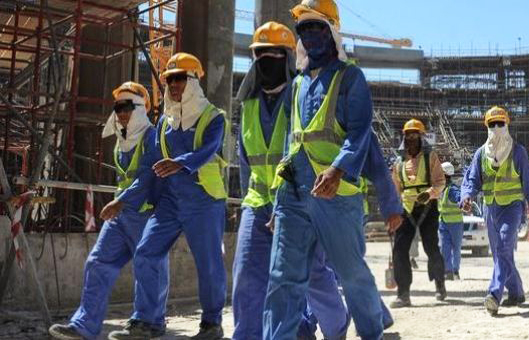 A war of figures in Qatar. Ten days after the start of the World Cup (20 November to 18 December), the organising committee has revealed in a press release the number of accidents at work on the stadiums’ construction sites. Between 2014 and 2020, 414 people died in “work-related accidents in Qatar, all sectors and nationalities combined“. But according to the Qatari organisers, only three work-related deaths, and 37 non-work-related deaths, relate to the Supreme Committee’s projects – the eight stadiums, 17 non-competition venues and other World Cup 2022 construction sites. These figures come from annual public reports published between 2014 and 2021, the period during which most of the infrastructure work was carried out. Qatar’s figures are a far cry from a report by the International Labour Organisation (ILO), which claims that 50 workers were killed in work-related accidents in Qatar in 2020 alone, and another 500 were seriously injured. But the ILO acknowledges shortcomings in the investigation and recording system. It suggests that these numbers could be higher. In the face of criticism about the living and working conditions of migrant workers, Qatar points to reforms implemented in recent years, including the end of “kafala”, a sponsorship system that made employees virtual properties of their employers. The emirate has also introduced a minimum monthly wage of 1,000 riyals (about 270 euros), and limited working hours during the hottest periods of the year.