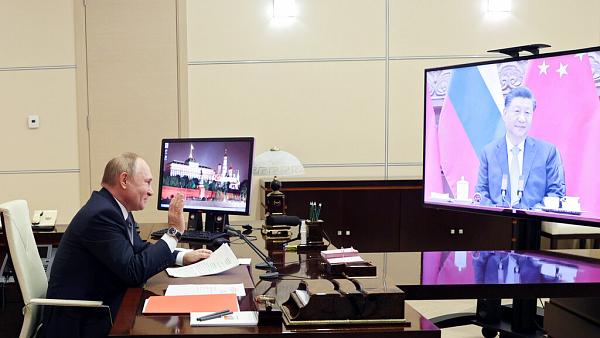 There will not be many heads of state and government at the opening ceremony of the Beijing Winter Games on Friday 4 February. But it is already a given that Vladimir Putin will be present. The Russian president confirmed this on Wednesday 15 December to his Chinese counterpart, Xi Jinping, during a video exchange (photo above) organised between Moscow and Beijing. The two leaders should even take advantage of the opportunity to have an official face-to-face meeting on the sidelines of the Winter Games. “As agreed, we will have talks, and then we will participate in the opening ceremony of the Winter Olympics,” Vladimir Putin told Xi Jinping. The Russian president took the opportunity to denounce the diplomatic boycott decided by the United States, Australia, Canada and Great Britain, saying he was opposed to “any attempt to politicise sport and the Olympic movement”. Vladimir Putin’s trip to the Chinese capital will be only his third foreign trip since the pandemic began. On the previous two trips, he met Joe Biden in Switzerland last June and Indian Prime Minister Narendra Modi in New Delhi. Suspended from the Olympic movement for two years, until December 2022, Russia will not attend the Beijing Games as a nation. Its delegation will wear the colours of the Russian Olympic Committee (ROC). Its leaders will not be accredited. But an exception is made if the invitation to attend the Games, including the opening ceremony, is sent by the host country. Vladimir Putin will receive such an invitation next February, as a personal guest of President Xi Jinping.