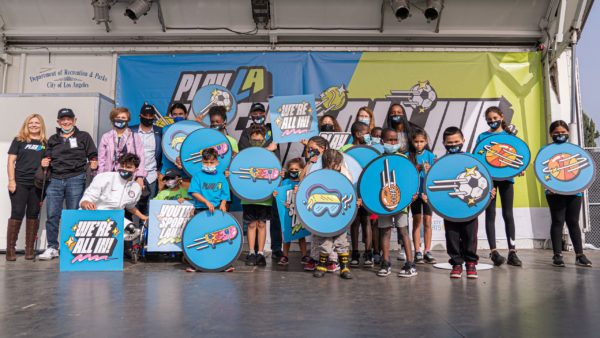 It’s on. With less than six years to go before the Los Angeles 2028 Games, the Californian city launched the summer season of its youth sports programme, PlayLA, an initiative devised by LA 2028 and the IOC. A first: it concerns young athletes with a disability. The programme includes para surfing in Venice Beach, para horseback riding at the RideOn Equestrian Centre in Chatsworth, and wheelchair tennis at the Studio City Recreation Center. The sessions will continue through August and into mid-September. Operation PlayLA was envisioned by the IOC and Los Angeles 2028 in 2017, during the negotiations for the 2024-2028 double vote. With initial funding of $160 million, it aims to make sport more accessible to young people in Los Angeles and to lead the way for a new generation of athletes in the run-up to the 2028 Summer Games. In practice, it is run by the Los Angeles Department of Recreation and Parks. Officially launched last November, it is aimed at children and teenagers aged between 5 and 17.